From a standing position, exhale and step your feet apart wide, raising your arms out to the sides, palms down. Turn your right foot at 90-degree angle, creating an alignment from your right heel that intersects the heel of your left foot, and turn your right thigh outward so that your your right knee cap is aligned with the center of your right ankle.

Keep your torso straight and facing forward and turn your head to look over your right fingers. Slowly bend your right knee, exhaling as you bring your right shin perpendicular to the floor, keeping your arms outstretched. Anchor your left foot into the floor.

You are now in the yoga position of Warrior 2 -- one of the several confident and strong and centering poses that Toledo Opera Guild members and guests stretched into for a recent Brunhilde Party fundraiser. The event raised $1,000 toward the guild's mission of supporting the Toledo Opera.

More than two dozen women gathered in the Hanna family home for an opera-inspired yoga class led by guild member Shirley Joseph, who also prepared an amazing brunch with the help of fellow guild members Barbara Brown and Wafaa Hanna.

Baher Hanna greeted guests at the door as they scurried in from a burst of spring rain. "Wafaa's husband, Baher, worked so hard to guarantee that our event would be lovely," Joseph said. "I told him we should make him an honorary Guild member!"

The Toledo Opera Guild did in fact gain two new members at the event, one which was gifted by a drawing. They both hail from the University of Toledo's medical college: Dr. Thea Sawicki, vice provost for health science affairs and university accreditation; and Dr. Amira Gohara, pathology professor and dean emerita.

The brunch menu was presented in acts like an opera:

Valkyries Vidalia Onion/Swiss Cheese Bake and other assorted cheeses: Brunhilde, a Valkyrie in Wagner's "Der Ring des Nibelungen," is the namesake of the guild's fundraising series; according to Norse mythology, the Valkyries were female warriors who choose who may die in battle or live.

Melba Toast: inspired by the Australian soprano Dame Nellie Melba and created in her honor by famous chef and fan Auguste Escoffier in 1897.

Assorted Vegetables with a Hummus Dip.

Chicken Tetrazzini: a delicious blend of chicken breasts and pasta in a harmonious sherry wine cream sauce with a special blend of herbs and a Parmesan cheese topping. This dish was created by Luisa Tetrazzini from Tuscany when she tasted turkey for the first time in America and added it to her pasta.

Butterfly Cookies: in honor of Cio-Cio-San in Puccini’s famous opera "Madama Butterfly," which the Toledo Opera will present in October.

Opera Prima, a Spanish Moscato, will caress the palate as an aperitif or with dessert -- or both! -- in honor of the prima dona in Bizet’s "Carmen."

Attendees first worked up their appetites and centered themselves for relaxing company on yoga mats in the large open basement. With lights dim and the instructor's gentle voice encouraging awareness of one's body and mental presence, guests filled their bodies with cleansing oxygen and aligned themselves with peace and clarity, working out stresses and worries as well as tight muscles and sore joints.

"I try to teach yoga as a way of life so that people can reach their full potential," Joseph said.

Such could be said of the guild's mission to spread passion for opera, enriching lives and helping our amazing local opera reach its full potential. It is a way of life.

Joseph shared this message: "Learning to stand strong creates confidence; and confidence empowers you to face whatever challenge comes your way. ... Remember to call on your 'inner warrior' as you face the battles in life. Challenges are what make life interesting and overcoming challenges is what makes life meaningful and fulfilling."

Our next Brunhilde Party is scheduled for June 16 at the Paula Brown Shop in downtown Toledo. Tickets are $15 and can be purchased in advance from guild members, at Hafner Florist and at Paula Brown, as well as at the door on the day of the event. Keep checking this blog and the guild's Facebook page for details!
at 9:13 AM No comments: 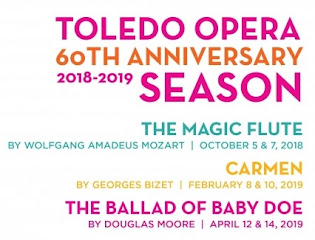